I’d like to post some recent winners we’ve had with various contests that Letters & Journals has done so far this month. First of all, we have John M from CA who won the “13 Pens” contest that was promoted in the August newsletter. Congratulations, John! Have fun with your new pens! 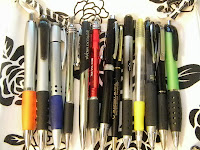 In addition to the newsletter contest, we had two contests on Facebook. The first was for a set of Haley’s Poodle cards and a journal that’s been sitting on my shelf for months (I don’t recall where I purchased it). This was won by Beverly Brown who happened to be celebrating her birthday! Woo-Hoo, Beverly!

Finally, we have the Owls in the Treetops journal from Chronicle Books that was won by JoAnne Roberts-Davis.