Some Survey Results for Letters & Journals 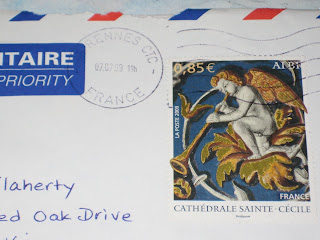 I’ve been watching the surveys come in for the letter writing and journal writing surveys that I’ve been conducting. I’m trying to gather additional information of what types of articles people want to see in the Letters & Journals magazine. I’ve gotten some great feedback and am taking copious notes for future articles and potential advertisers.

Letter Writing
For the letter writing survey 50% of the 100+ respondents said that they write between 1-3 letters per month. 17% said they wrote over ten letters a month (I would be in this group) and 16% said they wrote 4-6 letters per month. I realize that the survey is skewed because most of the people taking the survey are letter writers, which drives the number up. It’s not like surveying the general public of which many would say they write 0 letters a month.

Some of the articles that people said they would like to see in Letters & Journals include:

Some interesting suggestions that readers offered include these great ideas:

History of letter delivery (in the US and other places)
Letter writing protocol over the ages
Postcards (web sites that promote them, collections, etc)
Stamps (like an intro to stamp collecting)
Letter writing campaigns- Do they work?

If you haven’t taken either of the two surveys, you can visit them here. They take less than 3 minutes to complete (unless you’re in the mood to offer lots of suggestions, which are very welcome). Please forward this link on to others who may be interested. Thanks!

A special thanks to my friends who took the surveys even though they don’t write letters or keep a journal. Thank you!