Sealing Wax for Your Letters 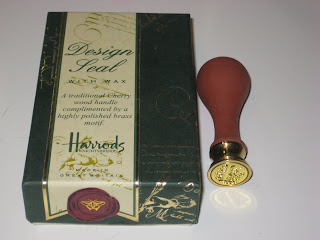 There are few things that can set one letter apart from all other letters such as a wax seal on the envelope. I picked up a couple of these seals when we were in London a few years ago.

Harrods has the most incredible stationery department! I must have spent 2 hours there going from room to room and deciding what to buy. It was glorious!

As much as I love having these I don’t use them as often as I should. I recently came across an instructional video at Paper Source where they show you how to use a glue gun for the sealing wax. This is much more efficient and not nearly as smoky as burning the wax by the wick. So I will try to incorporate more of these seals into my letter writing now that I know this better technique.

I took some pictures of the wax seal on an envelope I recently did, but the detail in the picture just showed a red glob so I will revisit that post when I get a new camera with a better zoom.