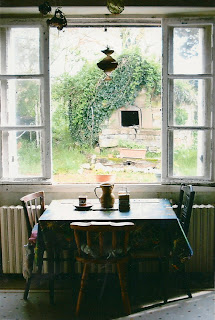 My pen pal, Jane, sent me this photo which is a picture from her farmhouse in rural France. Doesn’t it look like a postcard? I thought so too.

Jane and I found each other through one of the pen pal magazines that are published and we’ve been corresponding for about two years now.

In addition to some close friends who I write to, I have a few other pals- all from the US and, once in awhile, I will hear from one in Norway. As much as I love letter writing I’ve had to cut back while I focus more on starting the magazine, Letters & Journals. But I still enjoy writing 1-2 letters a week. Sometimes more.

If you want to send (receive) mail, but don’t want a pen pal, here are two websites that are all about getting mail!
We Love Snail Mail
Send Something

But if pen pals are what you’re after, check out any of these Pen Pal magazines/newsletters:

There is also one called Pen Pal Connection published by Dawn Thomas. Her email address is ppcdawn@yahoo.com

There are also many pen pal groups in places like MSN, Yahoo, Google, etc, so you can check those out too.