My Writing Area (all cleaned up) 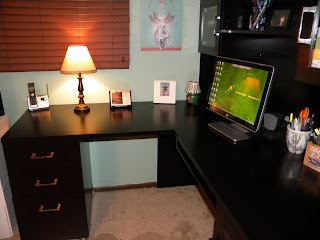 One of the features of Letters & Journals website will be a photo gallery of people’s writing areas. I would expect there to be at least three categories:

2. Reader’s submissions of their photos

Can you think of others?

I first wrote about this last Sept. in my post called ‘Writing Areas‘ that has one my favorite desk photos and got some favorable responses to this exciting concept.

Have you noticed there are entire magazines devoted to people’s work areas now? The two I’m thinking of are specifically related to crafting hobbies, but I think the essence is the same- a desk, a work station, a room with a view.

The photo in this post was taken after clearing off all of my files, folders, notebook, day planner, etc. on my desk. Maybe next time I will take the picture with the clutter still on the desk? I have posted additional photos on flickr, but most of them are the pretty much the same with different lighting and close ups. This room was originally a bedroom when we moved in 15 years ago, but as our children have grown and moved on, we turned this into an office/craft room.