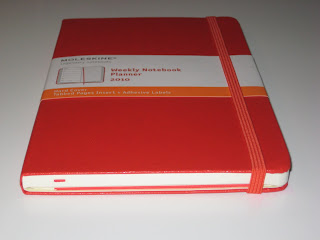 I bought this Moleskin planner for 2010 and am excited for the changes, adventures, thrills of this magazine venture as the journey continues. With 2009 coming to its closing quarter next month, I am making preparations for the next steps of the magazine for the end of this year and into 2010.

Over at the survey blog I removed the survey links I had been using to send people to Survey Monkey for the letter writing and journal writing surveys. I will leave the surveys up on Survey Monkey until the end of Sept. 2009 for the links that are still floating around the web and also in old posts.

Thanks to you and many others I collected almost 300 survey responses! And a big THANKS to all of you who passed the survey links along. I never would have gotten so many if you hadn’t.

By the end of 2009 I expect to get a sample copy of the magazine printed and will start approaching potential advertisers. In early 2010 work will begin on the website.