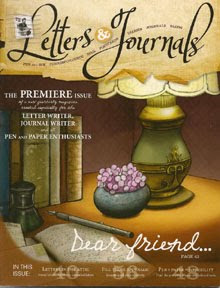 We launched the Letters & Journals website in May 2010 and had some great responses to the design and layout as well as some of the stories that have been featured. Thanks to those of you who took the time to comment!

We started sending out LetterNews, the L&J newsletter that we had hoped to send bi-weekly, but most likely will be a monthly, at least for a while. There’s a lot of great content out there, but it’s a matter of having the time to put it all together. The design for LetterNews is still in process, but in the meantime, we’re using the L&J logo.

A lot of you have said to get you on the list for the print magazine which is scheduled for 2011 (hopefully early in the year). The best way to do that is to sign up at the Letters & Journals website or for LetterNews. Please spread the word. The faster we can build the list of names, the sooner L&J magazine will go to press!