The InCoWriMo 2018 challenge ended on Feb 28 and I would say it was a success for me. Did I write a letter every day? No. But there were plenty of days where I wrote multiple letters, note cards or postcards. Overall, I mailed over 40 pieces of mail in February.

Here are three postcards from the Postcards from Penguin: One Hundred Book Covers in One Box. I reached out to three new people on the InCoWriMo website using these lovelies. 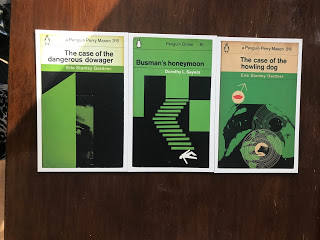 I also  heard from John via Twitter who sent me a lovely letter and two others who reached out from InCoWriMo.
We were vacationing in Roatan, Honduras for eight days in February so some of the mail I sent in February was the postcards I purchased from the island. Will see if they find their way to any of the recipients as I heard from multiple sources that mail is notoriously unreliable on Roatan. My husband and I had quite the little adventure finding the Post Office to purchase stamps. I will blog about that in an upcoming post.
Below are three letters I mailed after returning from Roatan. Note the Honduran stamp in the right hand corner on the top two envelopes. Initially, I had planned to mail from Roatan, but after hearing from multiple people about the unreliability of the mail, I opted to wait to mail until I returned to the States.