Songwriter and musician, Alex Woodard was dealing with the loss of his dog, while questioning where he was going with his life. During this time, Alex received a letter from Emily.

“He didn’t know it yet, but Emily’s letter had started Alex down his own
path of moving through loss and reconciling broken dreams, culminating
one cold December night on a small stage in suburban Atlanta. And he
found out for himself that a song is like a letter, and a letter is like
a prayer.” 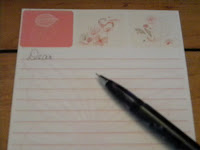 Reading an excerpt from “For the Sender“, you can feel the sadness in
Alex’s life even as he pursues his dream of being a musician.

“For the Sender” book, CD and website was born out of time. Partnering with other musicians, Alex found a way to turn four letters, including Emily’s, into 12 songs. They made a CD and a book called “For the Sender” and are continuing to receive more letters as their new business expands and gains even more momentum.

It’s inspiring to see how letters continue to connect and direct people’s lives. If you’d like to have your own “handwritten letter” considered for
a song by Alex and the For the Sender musicians, please mail it to: