Flat Grace Sends Herself in a Letter 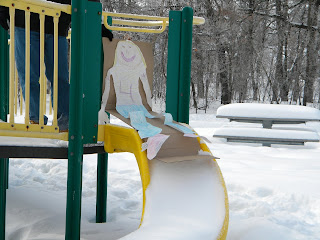 Flat Grace arrived in our mail in early February 2010. In a letter written by our 7 year old niece, Grace, and another one typed by her second grade teacher, our instructions were clear – take pictures of Flat Grace participating in the community and then mail the pictures and a letter back to the school.
We took Flat Grace to the library, the park, city hall, the community center and the movie theater. While outdoor at the movie theater, a woman pulled her vehicle over to ask if we were partaking in a Flat Stanley adventure. We had never heard of Flat Stanley but the more pictures we took and places we visited, the more we ran into people who had.
This project is based on the 1964 children’s book, Flat Stanley, where Stanley becomes flattened by a falling bulletin board. He has many adventures in his flattened state, including mailing himself to a friend in California.
Apparently, the Flat Stanley project is a popular one for grade school children. There is a website devoted to the Flat Stanley Project and there have been subsequent books chronicling the further adventures of Stanley According to a 2005 CNN article, Flat Stanley even got recognition on the red carpet when he appeared with Clint Eastwood at that year’s Oscars.
Best of all for me, besides the adventure of spending a day with Flat Grace all over the city, is the letter from our niece telling us about her flattened self.
Posted in Uncategorized