Wandering the local Barnes and Noble last weekend, I found this issue of Esopus magazine which I had never heard of before. Intrigued by the stamp/envelope collage cover and after a quick perusal inside the magazine, I paid the $14 price. 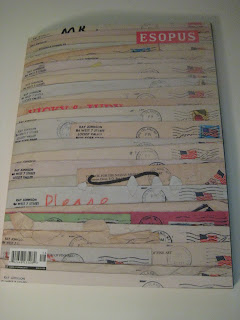 The article that the cover art refers to was an interesting piece about the correspondence between Ray Johnson and Robert Warner. Mr. Johnson is often credited for the concept of ‘correspondence art (mail art). And, although he may not have invented it, he was the first major proponent of such according to Wikipedia. 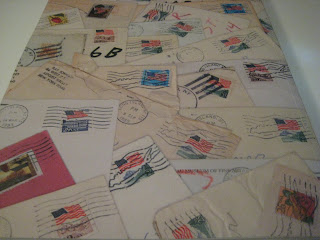 Warner responds to interview questions about Johnson such as how they met and the types of mail art they used for their correspondence. I didn’t know very much about Ray Johnson except that he was closely associated with mail art so the interview was informative as well as entertaining. 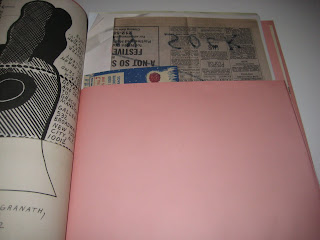 As an added bonus, there was a packet of paper ephemera (shown above) that was filled with about a dozen pieces of paper including the newspaper reprint and the postcard you can just see peeking out of the orange/pink sleeve. I assume these are reproductions of the art that Ray sent to Robert. 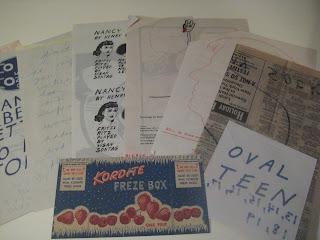 The photo above shows a close-up of some of the added papers that were included with the magazine.

In an unrelated article later in the magazine was a 32-page booklet that told of letters from 1927-29 that were found in an attic of the article’s author, Kathe Burkhart, in 1988. Amongst the typed letters are black and white photos of the two female correspondents as well as some of their history. Intriguing.

Overall, I was pleased with the contents of this new magazine and even at $14 they are not making a profit. They state on their acknowledgement page:

“The magazine never includes advertising or commercially driven content and is priced well below its actual cost of production so that it can be accessed by a wide range of readers.”