Day 1 at the National Stationery Show 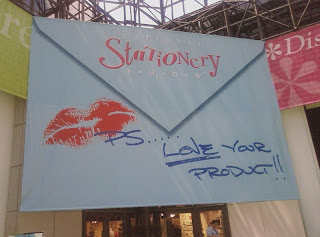 Today was the Day 1 of the National Stationery Show. I visited lots of booths and met some wonderful creators, vendors, sellers of all things stationery.

Highlights of the day included meeting Peter Hopkins at Crane Paper. Peter was kind of enough to help me out a couple years ago by answering some questions for me as I started conducting the initial research into starting this magazine. I have followed Peter’s blog for a few years and meeting him today was like meeting an old friend. He was very warm and welcoming.

Peter also surprised me by giving me a gift bag filled with boxes of Crane cards and stationery and, boy, did I have fun looking through that. It was all I could do to not open one of the boxes and start writing on a card when I got back to the hotel. But, alas, my husband wanted to go out to dinner, so off we went. Most likely I will be including one of these boxed cards in some contest or drawing in order to spread the stationery joy.

Other booths I visited include Truly Sisters where I met the artist and owner, Mary Torch. This is Mary’s first year at NSS and she got started as an artist creating sorority stationery and thank you cards for her daughter who recently joined a sorority. Apparently sororities in the south are big into cards and thank you notes and they needed something more modern and chic than they were finding. So Mary created her own line and has been expanding her choices and selection over this past year.

Eco friendly cards has been a big theme this year. Kelp Designs was one of them and they were giving out twitter pins for those who stopped at their booth and was a twitter follower, or wanted to be. They were very nice and seemed surprised by all the twitter fans they had. Ecosystems and ecojot were also at the show.

Too Little Trees plants a tree for every blank book they sell. They had a wonderful selection of journals and were giving away free journals to all of their booth visitors.

Many of the vendors I met were wholesalers and sell only to stores, of which there were a lot of store owners and buyers at the show. But from the conversations I had with others who have been to previous shows, they fear the traffic is down from the last couple of years as the hard times continue. But it was only the first day, so hopefully Monday and Tuesday will see an increase in traffic walking the show aisles.

I walked about half of the show and will walk the other half tomorrow. There are over 900 booths, which, I believe is down from 1,000 at last year’s show and 1,400 from a few years ago. On Tuesday I will go back and see some of the booths that I might have missed- too busy, looking the other way, a missed aisle, etc.