How will you celebrate National Letter Writing Week (Jan. 9-16, 2011)? You can bet that I will be writing a few letters. I have a lot of catching up to do as I’m notorious for waiting until something is due before I tackle it and I have been working all week on the Sketchbook Project (due to be mailed 1/15/11). My theme is ‘Dirigibles and Submersibles‘ (think of Robert De Niro’s flying machine in Stardust and Captain Nemo’s submarine in 20,000 Leagues Under the Sea). I will post more about this later. 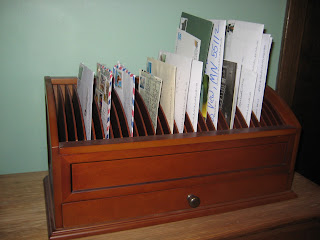 I have been fortunate to hear from every one of my pen pals in the last two weeks and now I will be doing some serious letter writing to get all caught up. Because of letters and holiday greetings getting crossed in  the mail, I received two letters from a few pals which makes my tardiness look even worse than it really is.

A couple of the incoming pieces of mail pictured here are postcards from postcrossing. We used to use this  letter holder for bills, but I like it better for letters. Don’t you? 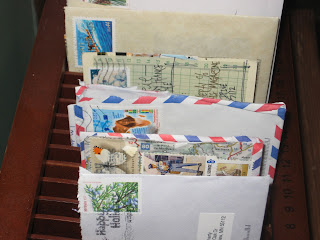 I hope you will take a few minutes to jot off a quick or lengthy letter to someone who would love to hear from you.