I started reading Virgil Wander on loan from the library and before I had completed the first page, I knew that I was going to purchase my own copy. I was already in love with Virgil based on his name, Virgil Wander, and the beautiful star-filled cover evoking small-town America (I’m from a small-town in ND). 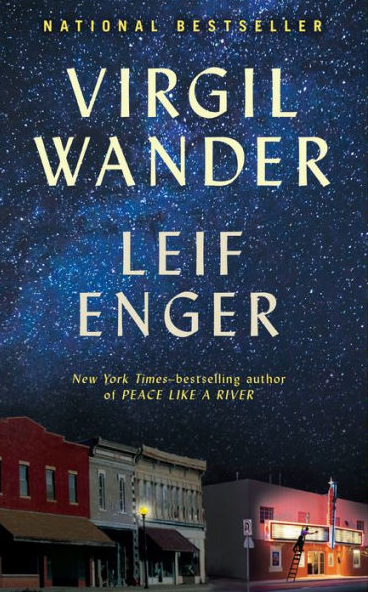 Best known for Peace Like a River, author Leif Enger, has written a charming and off-beat recounting of a life made with safe and predictable choices.  How Virgil came to make those choices and what he’ll do now (post concussion) create opportunities for second chances.

Now I think the picture was unspooling all along and I just failed to notice. The obvious really isn’t so- at least it wasn’t to me, a midwestern male cruising at medium altitude, aspiring vaguely to decency, contributing to PBS, moderate in all things including romantic forays, and doing unto others more or less reciprocally.

If I were to pinpoint when the world began reorganizing itself – that is, when my seeing of it began to shift – it would be the day a stranger named Rune blew into our bad luck town of Greenstone, Minnesota, like a spark from the boreal gloom. It was the day of my release from St. Luke’s Hospital down in Duluth, so I was concussed and more than a little adrift.

And it just gets better from there – the setting on Lake Superior, the memorable and quirky characters, the storyline, the beauty and cadence of the writing, such as this bit from when our protagonist meets Rune, a stranger in town:

After asking Rune where he’s from (Norway), Virgil says, “Ah- Norwegian.” I wouldn’t have guessed from the accent which had to me the weathered consonants of not just a distant place, but an ancient time.

Virgil owns a movie theater in the small struggling town (fictional) of Greenstone. After his brush with death, Virgil reassess his life and his choices. This book is filled with his observations and new choices with doses of humor, whimsy, and imagination.

This is a book that I will read again. And maybe again.

Midwestern movie house owner Virgil Wander is “cruising along at medium altitude” when his car flies off the road into icy Lake Superior. Virgil survives but his language and memory are altered and he emerges into a world no longer familiar to him. Awakening in this new life, Virgil begins to piece together his personal history and the lore of his broken town, with the help of a cast of affable and curious locals—from Rune, a twinkling, pipe-smoking, kite-flying stranger investigating the mystery of his disappeared son; to Nadine, the reserved, enchanting wife of the vanished man, to Tom, a journalist and Virgil’s oldest friend; and various members of the Pea family who must confront tragedies of their own. Into this community returns a shimmering prodigal son who may hold the key to reviving their town.

How I found the book: I saw it at the bookstore. The cover caught my eye and the plot sounded engaging. Plus, I absolutely love his name – Virgil Wander.

Format: Started reading online at Scribner, then purchased my own copy at local Barnes & Noble.