“As Time Goes By” 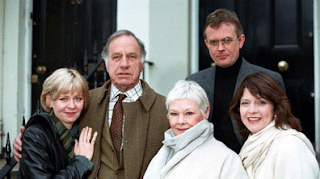 I have recently begun watching this British sitcom starring Judi Dench and Geoffrey Palmer. As Time Goes By is about these two characters who met and fell in love in the 1950s. They’re separated after he is sent to fight in Korea and the letter he wrote to her never arrived. They meet again 38 years later, she is a widow and he is divorced.

So the plot of the sitcom, which ran from 1992 to 2005, is based on the letter that never arrived and the lives that were potentially changed because of it.

I was introduced to this series by pen pal, Christi, who mentioned it in one of her letters. Finding a new television series is always fun, but finding one that was on the air for 13 years is like hitting the jackpot! I go online and order the seasons as they are available at my local library. I’ve also recently discovered Monk, so between these two shows, I should be good to go for awhile.